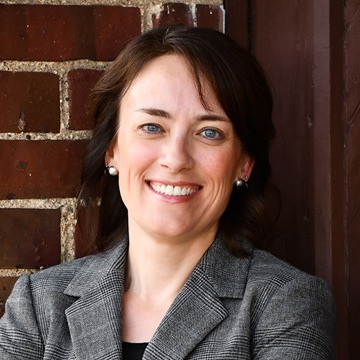 Jessi Stucke, ACP, was born in Sioux Falls, SD, and was raised in Sheldon, IA, Sioux Falls, and Aberdeen.  After graduating from Aberdeen’s Central High School, she attended the University of Minnesota – Minneapolis and later received a Bachelor of Fine Arts degree from Minneapolis College of Art & Design (MCAD).  She returned to Aberdeen in 2005 and was the 2011 recipient of the Dale Stein Award upon graduation from Leadership Aberdeen, a program of the Aberdeen Area Chamber of Commerce.

Jessi joined Richardson, Wyly, Wise, Sauck & Hieb in 2014 and works primarily with Jack Hieb. Jessi became a Certified Paralegal (CP) in 2016 and obtained her Advanced Certified Paralegal (ACP) credential in Trial Practice in 2021.  She has been a member of the National Association of Legal Assistants (NALA) and the South Dakota Paralegal Association (SDPA) since 2016.  She is currently serving as SDPA’s President and continues to serve as chair of the Newsletter Committee, a position she has held since 2017 as editor of SDPA’s quarterly publication, the Reporter.  She also serves on the Website Committee and served previously on the Education and Membership Committees.  She received SDPA’s Member of the Year Award in 2018.

Jessi and her husband, Chris, have two children, Evin (13) and Adeline (7).  Away from the office, she serves as Treasurer for the Aberdeen Curling Club, Treasurer for the Holgate Middle School PTA, and Vice President of the church council at Holy Cross Lutheran Church.  She enjoys trapshooting, curling, archery, and playing board games and Minecraft with her family.